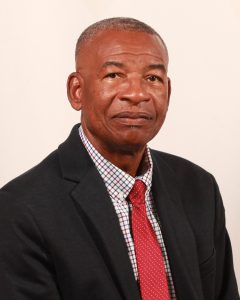 Vance Lewis joined Cable and Wireless (now FLOW) in 1972, rose to VP of Network Services for the Leeward Islands from 1999 – 2002 and Chief Executive BVI from 2002 – 2008 following which he retired from the Company.

He also served as the Special Advisor to the Minister for Communications and Works in the Government of the Virgin Islands, specializing in the areas of Telecommunications and Renewable Energy from August 2013 to December 2017 as well as Chairman of the Advisory Group to the H. Lavity Stoutt Community College from 2015 and 2017.

He is also currently Chief Executive Officer of Tortola Pier Park Limited – the Company which manages the main cruise port of the British Virgin Islands since February 2018.

Mr. Lewis was named as Chairman of the Telecommunications Regulatory Commission effective February 1st, 2020 for a three-year period.

In the Philanthropic area, Vance joined Rotary in 1991. He was elected President of the Rotary Club of Road Town and served as such from 1996 – 1997, Assistant Governor BVI 2007 – 2010 and Governor of District 7020 in 2012 -2013. He was the first person in the BVI to have been elected Rotary District Governor. Since then, he has been elected and appointed to numerous additional roles at District, Zone and Rotary International level.

He is a Discussion Leader at the Rotary Leadership Institute Sunshine Division (RLISD), Paul Harris Society member, Major Donor to The Rotary Foundation, member of the Bequest Society and several Rotary Action Groups and Fellowships.

He holds a Higher National Diploma in Telecommunications, an Executive Diploma in Business and Strategic Management and is a Fellow of the Chartered Management Institute of the UK.

He is married to Sophia Ann Marie and has 2 children – Trevon and Taryn, one stepdaughter Riiah, and 3 grandchildren. He enjoys life, reading, sports and fine wines.

CDC director warns of
Much of America
Pfizer and Moderna vaccines found to be 90% effective in real-world conditions
Under real world conditions, the Pfizer and Moderna Covid-19 vaccines provide highly effective protection, according to a new report from the US Centers for Disease Control and Prevention.
Canada halting AstraZeneca vaccine shots for people 55 and younger
Canada